How was it Discovered?

In the 1970s a jazz musician named Fabien Maman, working with a French physicist (Joel Sternheimer), discovered that body tissues, organs and acupuncture meridians each have their own musical note.  He went on to work with Helene Grimal, a French scientist.  They discovered that even at lower volumes, sound had an effect not only on healthy cells but also on cancerous ones.

Progressing the sounds up the musical scale caused the cancerous cells to ‘explode’.

Another musician, Jim Oliver, put sounds into a pair of headphones strapped to someone’s ankles.

They responded to the sounds although their ears couldn’t hear them.

Given that our bodies are made up of several elements, including water (70%) wouldn’t this suggest that we can be influenced by the sounds around us, and this influence extends to affecting the water, tissues, organs and cells in our bodies.

For more info on this subject, check out The Healing Power of Sound by Simon Heather, founder of The Sound Healers Association (UK) and The College of Sound Healing.  SimonHeather.co.uk (and no, I don’t get a kickback for the plug, I just believe in this stuff so much I want to put it out there for anyone who’s as interested as I am).

There are different types of sound pulses or beats used in brainwave entrainment. The three main ones are:

1. Binaural which have been around for a long time. Different frequencies are played into each ear, causing the brain to produce electrical impulses that match the difference between the two frequencies. They require the use of headphones. After a time the brain gets used to them and tends to ignore them.

2. Monaural beats are thought to have a longer term effect than binaural beats. They consist of pulses at the same frequency played simultaneously into both ears. They don’t have to be listened to through headphones.

3. Isochronic tones are the latest and most up to date tool of brainwave entrainment. They are more intense and have more effect on the brain.

MeditationMonk uses isochronic tones in its sessions, either singularly or in combination with monaural or binaural beats.

How will this Help ME ?

MeditationMonk combines the healing power of meditation with the healing energy of sound. Think of music, natural sounds, blended with sound frequencies to benefit your body, mind and spirit. How will you benefit?

New levels of creativity will spark for you and ignite within you as you free yourself from stress and anxiety. 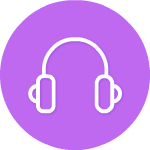